Past Years: 2020 2021
Learn More: Pratt Institute B.F.A. in Communications Design
Noelani Fishman
The Nexus of The Strange, The Intimate, and The Web
Tags +
art direction, artist books, book cover design, book design, collection, concept art, confession, culture, data privacy, digital accessibility, digital painting, dystopian, editorial illustration, experience, experiment, fantasy, fine art, friendship, generative design, graphic design, happiness, human centered, illustration, imagination, imaginative, intimacy, loss, love, magic, memories, mental health, multimedia, mythology, narrative, personal history, poetry, psychedelic art, psychology, publication-design, publishing, religion, social, social media, speculative, tactility, the subconscious, visual narrative, writing
“The Nexus of The Strange, The Intimate, and The Web” is a catalog of encounters with strangers, the rise of internet culture, and a glimpse into the religious history of confession. “The Nexus” was born from late nights on Omegle connecting with 40-year-old men as an isolated 12-year-old in the middle of Tennessee. Emotional intimacy is complicated. The boundaries separating public versus private have become even more blurred since the rise of social media. “The Nexus of The Strange, The Intimate, and The Web” serves as a tool for readers to question intimacy, its invasive nature, and who we reserve our most intimate moments for. “The Nexus” is divided into two explorations- a categorization of encounters with strangers on Facebook groups and a deconstruction of the sacrament of penance. Across five Facebook groups embracing intimacy and the conceptual “stranger”, three invasive questions were asked: “What is your biggest fear?”, “What is your biggest regret?”, and “What do you want to do before you die?”. The project took off unexpectedly, receiving over one hundred responses. Responses were categorized into six universal human themes- “Birth, Life”, “(Fear of) Death”, “Companionship”, “Loneliness”, “Love”, and “Loss”. Six responses from each theme were selected and used to derive an illustration. Artificial Intelligence created six responses to each theme as well. Six AI-generated responses distilled into one image per theme. The quotes included are somewhat autobiographical, each selection linked to a foundational part of my personal life. In this way, “The Nexus” is just as much a personal diary as it is a universal exploration of intimacy. After all, how can one divorce themselves completely from their work, especially when intimacy is in question? Religious exploration of penance took a couple of avenues. Penance (also known as confession) is a sacrament that often fills Catholics with a lifetime of guilt and paranoia. In recent years, confession has become a subversive and public act. With apps like Whisper, Yikyak, and threads such as “Am I the Asshole”, confessing one’s secrets and revealing oneself intimately has never been more performative. Within the Bible in Roman Catholicism, Leviticus is often used as a reference point for rites and punishments. Using the idea of censorship and the screen of the confessional booth as a visual device, I created blackout poetry of Leviticus passages containing confession. Blackout poetry serves as a tool to shine a light on some of the absurdity of violence within the book. Then, these sections of strained Leviticus were used as verbal prompts for Artificial Intelligence image generation. The resulting imagery was nonsensical and abstracted. As a third method of translation, much like an inkblot test, illustrations were drawn from AI imagery. Six of these sketches became chapter headings. Strained Leviticus was then rearranged, creating a new mythos about confession. Within the myth, the names Asifa (feminization of Asif) and Ardea reference Abrahamic faiths. However, in a way to create timelessness, the deity is titled “The Anointed”. “The Nexus” is wide in its scope of exploration, however, when all is said and done, it must be acknowledged that one artist can never truly create something universal.
https://www.noelanifishman.com https://www.instagram.com/bynoelani 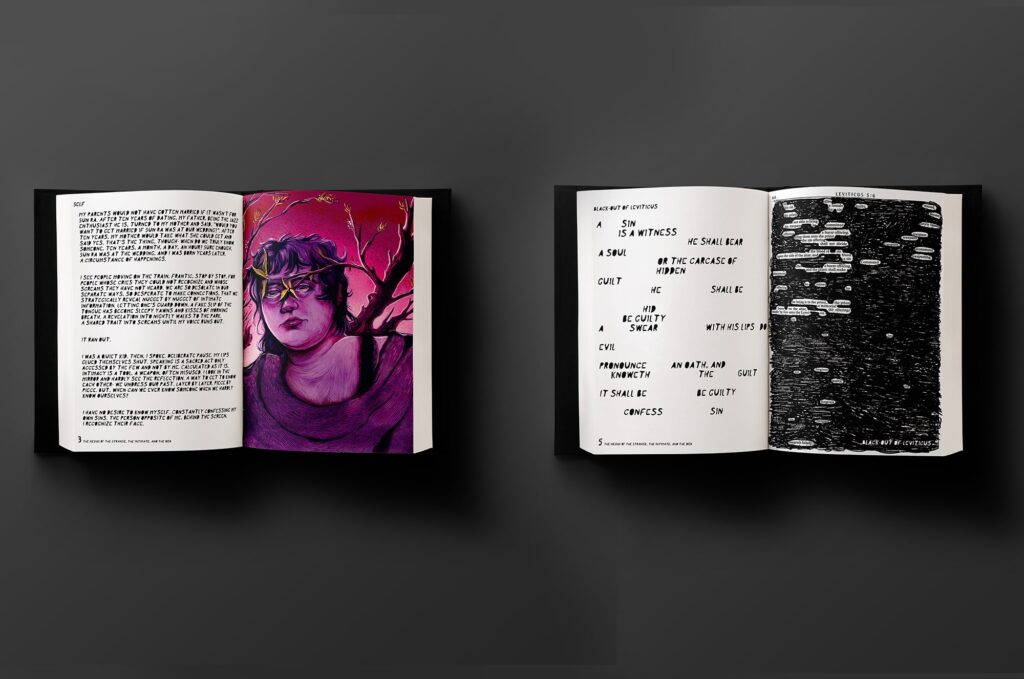 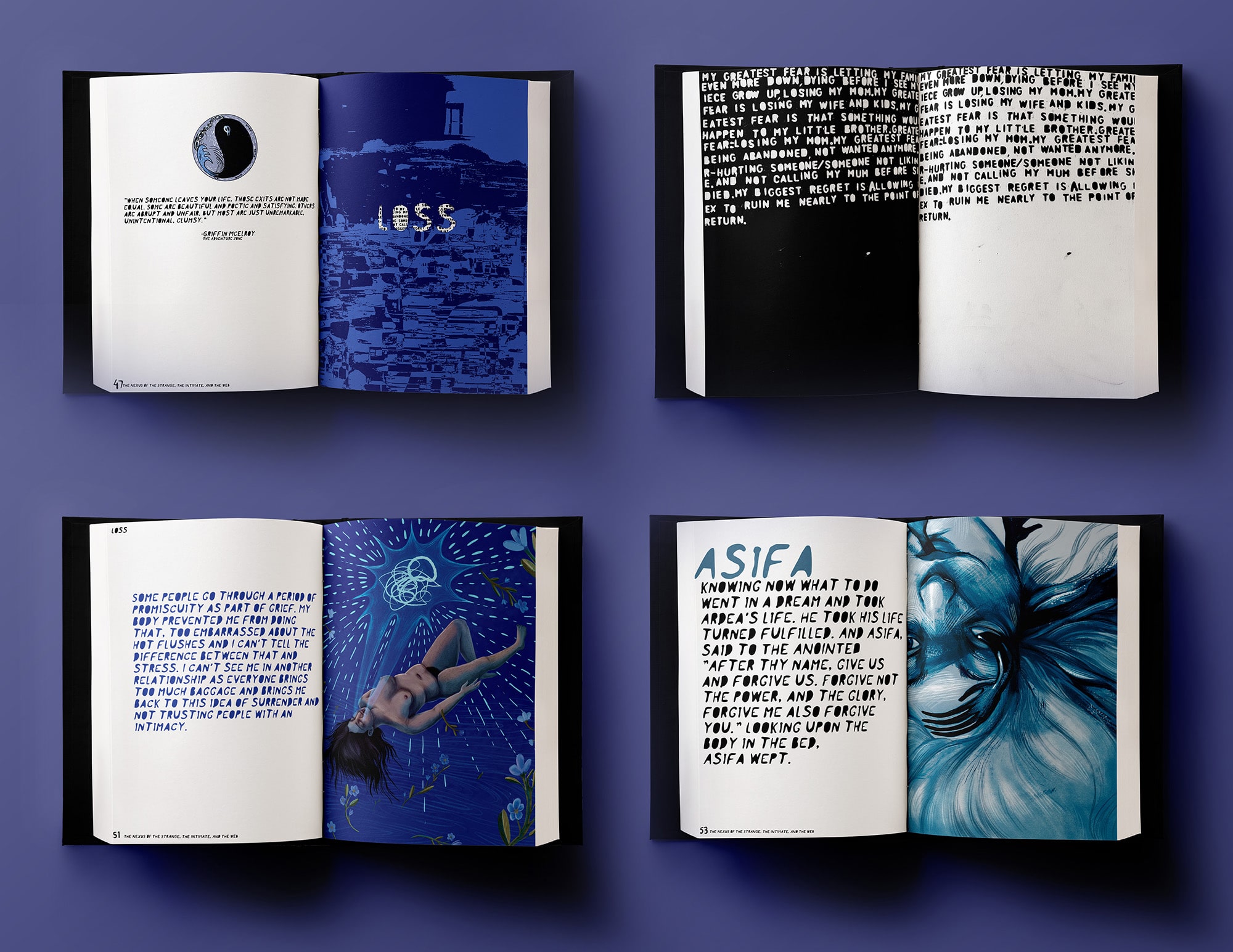 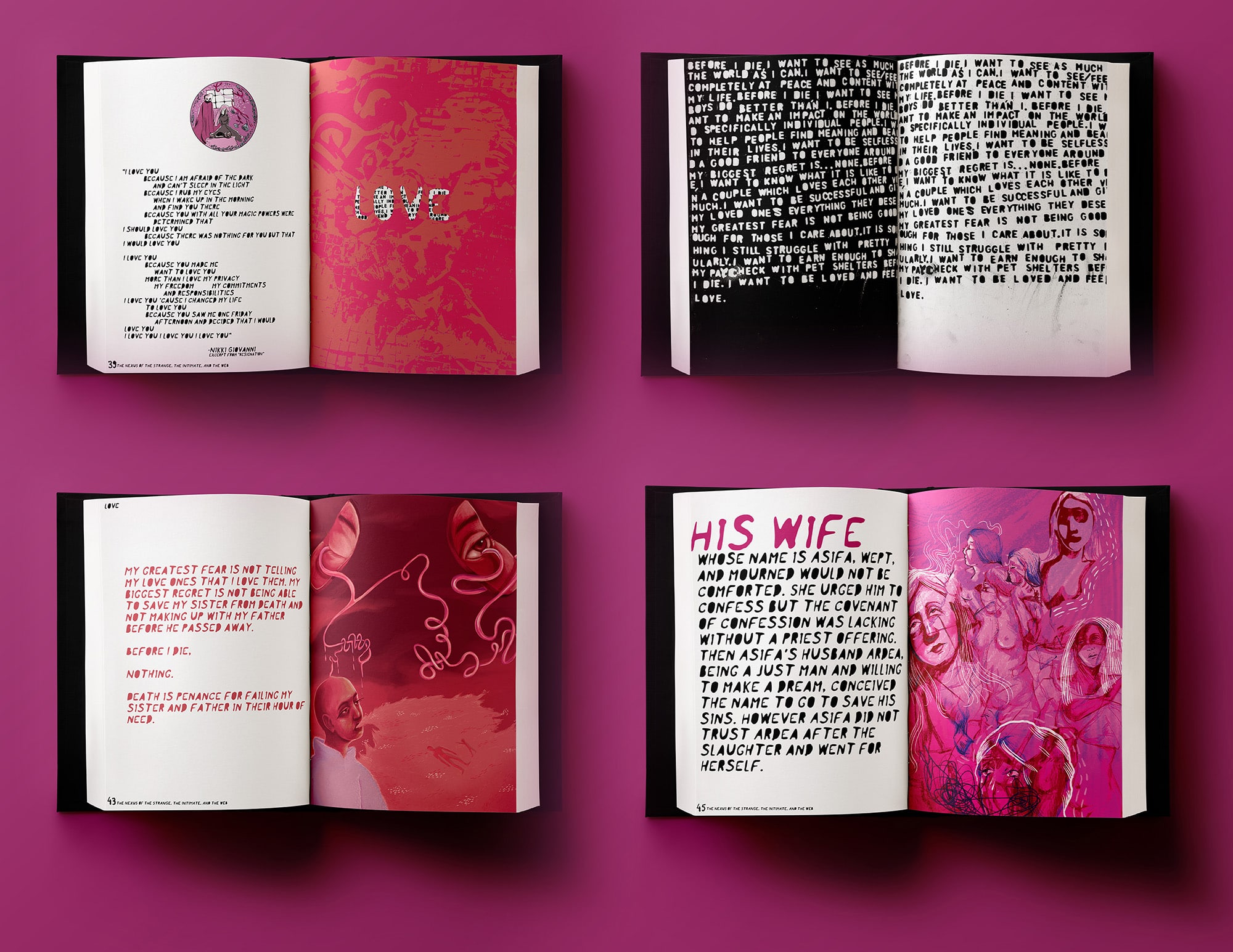 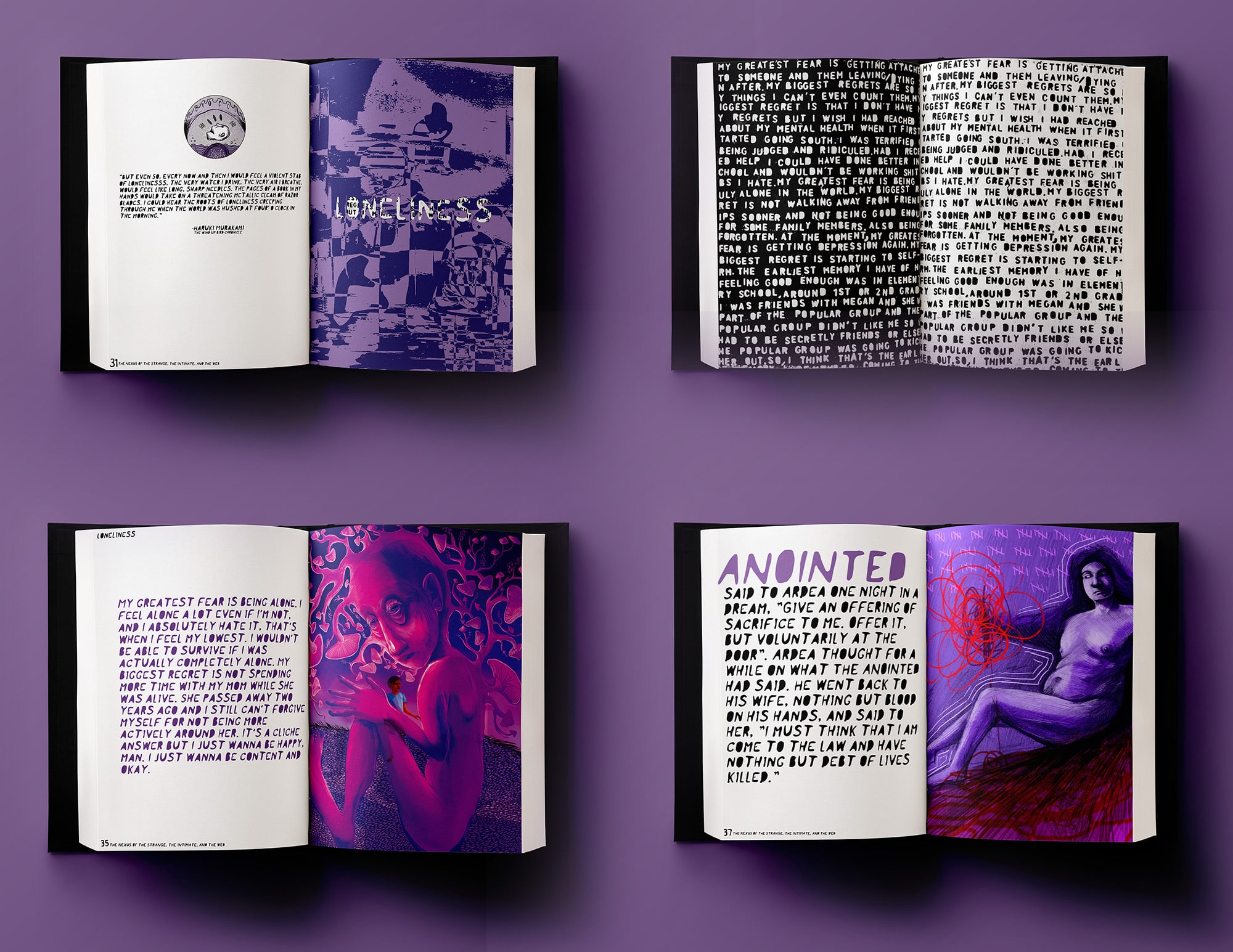 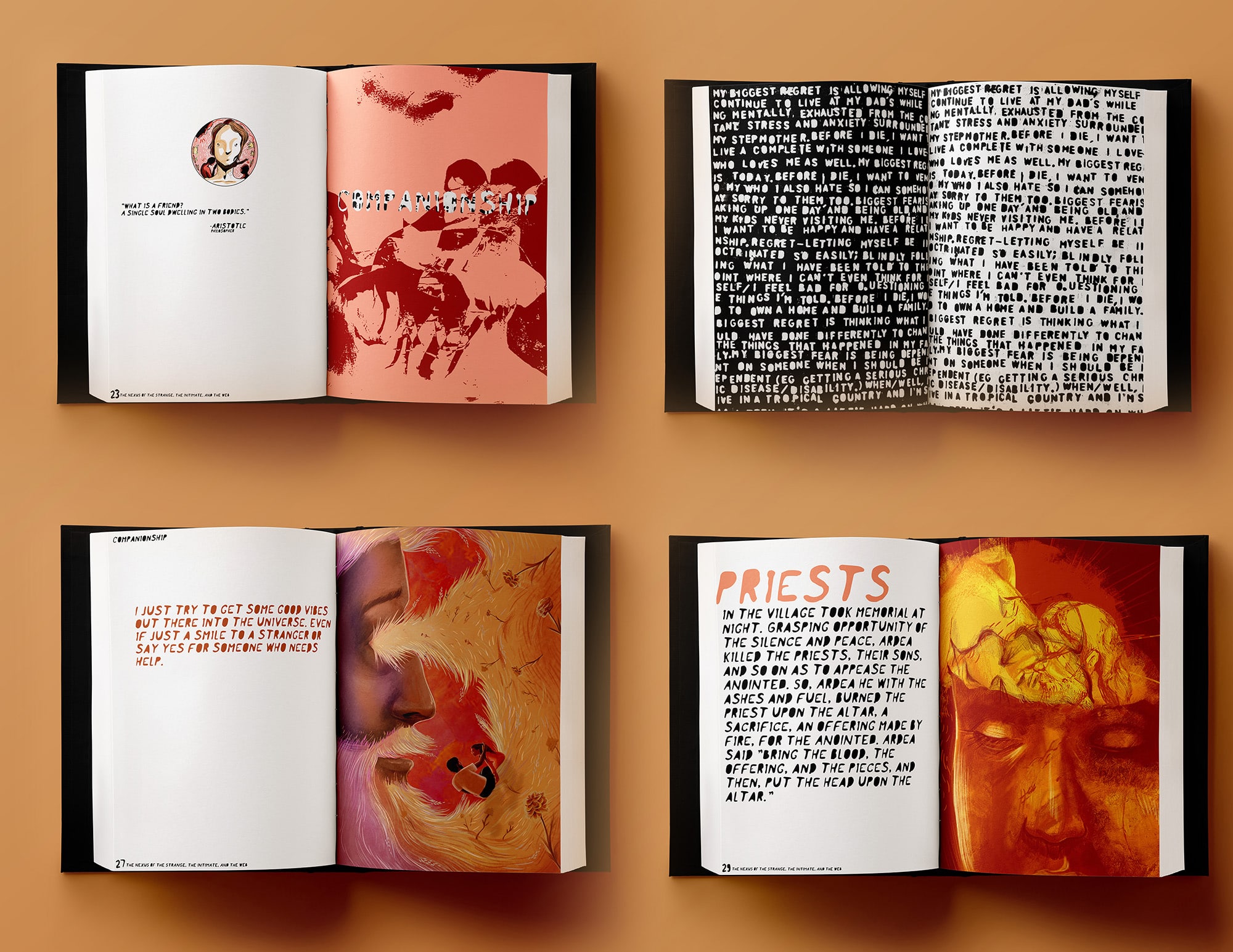 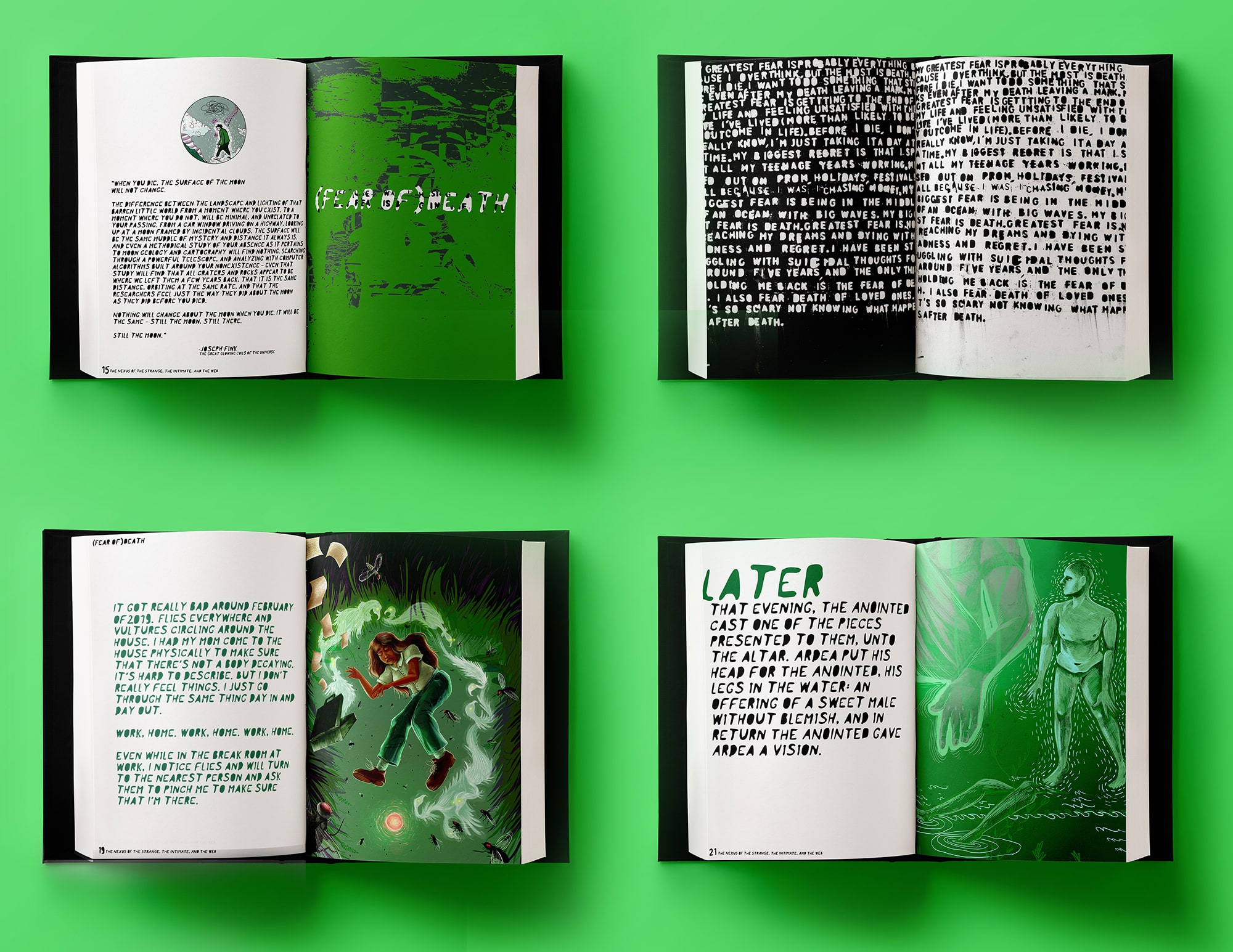 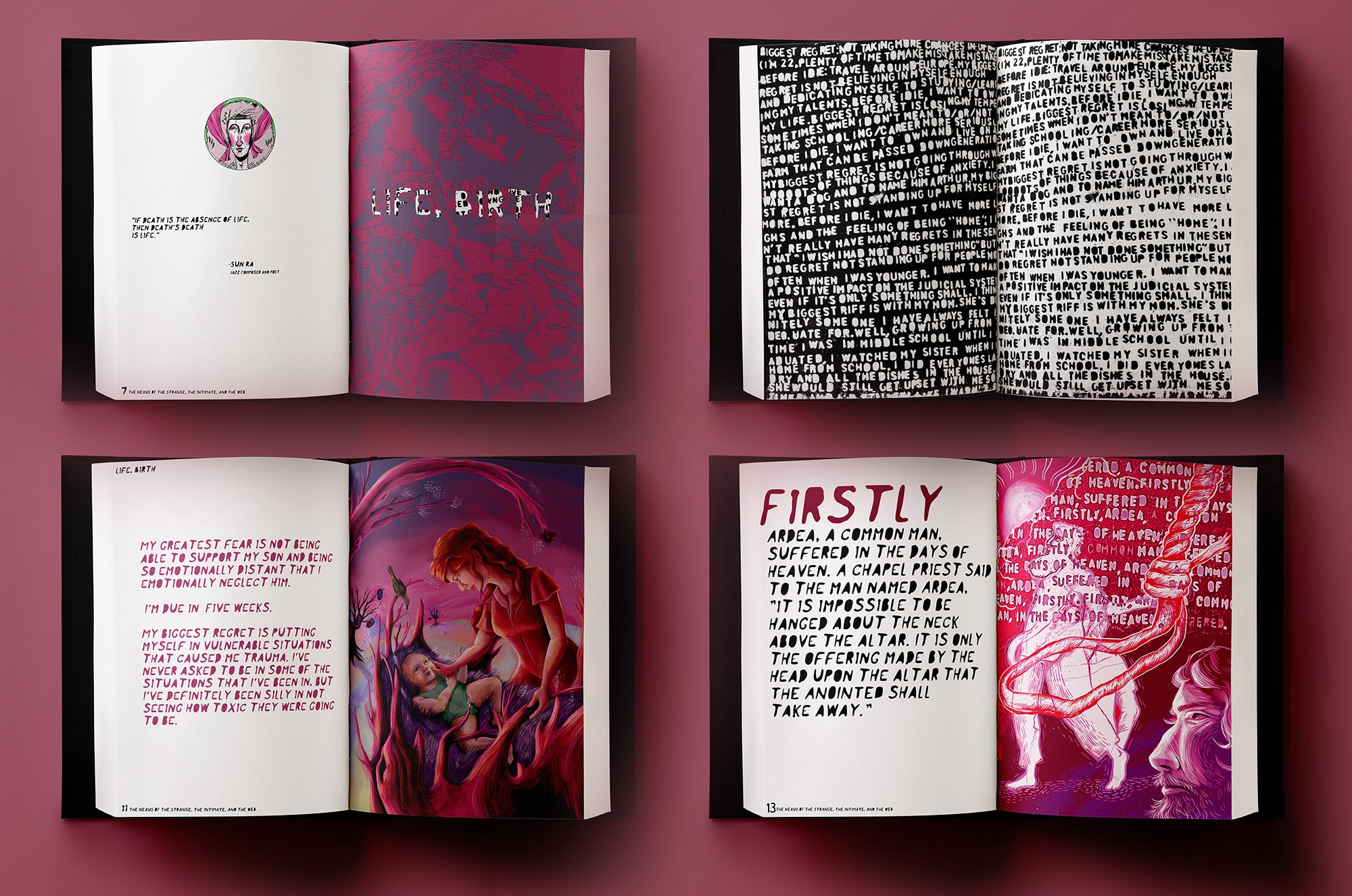